We have been married for 48 years, and high school sweethearts. We have two children, our son Stephen, Kristi and Jason our daughter and son in law and 4 grandkids. Camping has been a way of life for us and our kids. We have had all the different varieties, tent, popup, truck/camper, and mini winnie. We will be traveling in a 45' Luxe Toy Hauler and just love it. We have both traveled overseas with my husbands company and now are very excited to travel through the United States with our home wheels and little Lacilou our 4lb yorkie.

Where are the Nomads?

Our next stop was Fort Amarillo Rv Resort in Amarillo, Texas!! Sounded like an awesome place on line, even the pictures looked good, and I choose it as they stated that there was a fishing lake!! I wanted Guy to be able to use his new fly fishing pole that all his friends at Seagate had given him for his retirement!! Ha, Ha,  jokes on us!! It was a man made duck pond!!  This campground is in major need of maintenance all of the buildings and grounds, it looked like at one time they were trying to fix things but you could tell it was  a very long time ago.

We did meet an awesome couple that also was staying there while we were,  that are from Canada, Donna and Drew. It was great meeting them and talking about and seeing pictures of Canmore, AB.

Drew is a man of many talents, he  sat down with me and helped me with how to find some things on google map, also Guy’s bike had gotten a flat while we were in Tuscon, since we did not have the proper tools, Drew who works on bikes helped Guy fix the tire!! He and Guy also went around our coach and worked on man stuff. I did not get their picture nor any of the camp ground. Someday we hope to head in their direction we would like to meet up with them for a tour!

The one thing we did do and loved was visit Palo Duro Canyon. Palo Duro is the second largest canyon in North America, it consists of 27,173 acres. The canyon is about 120 miles long, 600 to 800 feet deep. The known Native American tribes that were in the area are Kiowa, Comanche and Cheyenne. During the Red River wars in 1874, Col. Mackenzie was ordered to move the Native Americans to Oklahoma. They captured over 1,400 horses and cut the tribes off from their transportation and after which the Native Americans then surrendered. 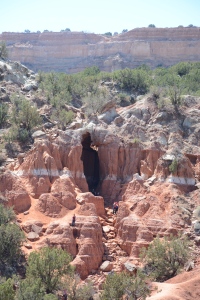 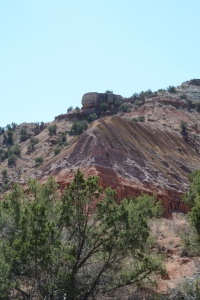 Palo Duro is Spanish for hard wood due to the juniper trees found in the canyon along with other common trees, mesquite, cottonwood, salt cedar, willow, soapberry and hackberry.  There are numerous animals through out the canyon, bobcats, sheep, coyotes and of course rattlesnakes!! We did not see any sign of them but we did see lots of birds.

You can drive through the canyon and park anywhere and hike along the many trails, or ride on the mountain bike trails, there is also primitive and full hook up camping. After driving down into the canyon I would not recommend taking any large rig down the windy steep road. There is horseback riding with stables, picnic areas as well as a restaurant. 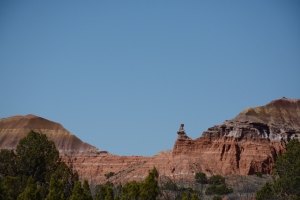 nally make it to Georgetown, Texas and the New Life Rv Park. Our GPS had us going around and around  3 times, but we could get there, we even got on a toll bridge twice before we could figure out what went wrong. The park was a wonderful place to stop, we had grass, cement patio, and lots of places to walk Lacilou.

What was the most interesting thing was this place was stuck right in the middle of a farm, yup, cows, horses, and the biggest and more pigs than we have ever seen!! I wanted to get a picture of the pigs out in the field but I did not want to intrude on other campers spots. Every night they would round up the pigs and put them in the barn, in the morning I would try to watch them open the gates, what a noise those pigs made!! They were so glad to be let out. 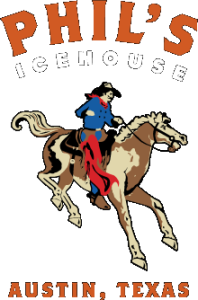 We got to meet up with a friend of Guy’s from work, Amy and her boyfriend, with her two kids and his little girl. We met at a great place called, Phils IceHouse! Guy and I had the best hamburger, it had grilled jalapeños, avacado and a special chipolte sauce. Guy decided that he also was having a root beer float! After dinner right next door was Amy’s Ice cream, yes, we all went for it! I went for the double scoop belguim chocolate with reeses peanut butter cups mixed in.

I need to remember to bring my camera with me as I don’t have any pictures of the last few days. I have taken so may pictures and have only shared a slight few on this blog. But I love the remembrance of where we were and who we were with.

We also met up with our good friends, Danny and Karen, Danny worked with Guy at Seagate for over 20 years. We have traveled around the world with them. We had not all four of been together in about 10 years. So it was none stop talking between us all and so much reminiscing.

We went to lunch at  the Oasis at Lake Travis and of course what do they serve but Guys favorite food?  Mexican!! The Oasis has grown to be the largest restaurant in Texas, it seats close to 2,500 people with most of the seating outdoors, on multiple levels, I could not count them as they were all over the side of the hill and from where we were sitting we could not see them all.

Each indoor room has a different theme and ambiance. It has an indoor entertainment facility with a retractable roof on the third floor, and has several banquet rooms for private events.

After we left Santa Fe our air filter light came on saying full!! Well rats, one more thing! We called around to the different repair places but no one had one, so we called Freightliner in Austin, thinking we could go there and get a replacement, no they didn’t have one either. Ok, so we next call Jason, at Monaco in Indiana. He calls around and there is only one on the whole east coast!! Go figure! They decide to ship it overnight to a freightliner truck stop in a town above Georgetown where we were going to stay. Danny and Guy decide they can take this apart and replace it themselves, this thing is about 20″ round and about 18″ long!! Karen and I plant ourselves in chairs and proceed to talk while they work away, it only takes an hour and yea good to go!!

It was hard to say Goodbye to Danny and Karen, but we know that no matter how long it is until we see each other we will continue from the same spot like there was no break!!

Have a Blessed week y’all, and stay tuned to “The Rovers” to find out where we have gone  next and if there are any more mishaps!! LOL

We have been married for 48 years, and high school sweethearts. We have two children, our son Stephen, Kristi and Jason our daughter and son in law and 4 grandkids. Camping has been a way of life for us and our kids. We have had all the different varieties, tent, popup, truck/camper, and mini winnie. We will be traveling in a 45' Luxe Toy Hauler and just love it. We have both traveled overseas with my husbands company and now are very excited to travel through the United States with our home wheels and little Lacilou our 4lb yorkie. View all posts by OUR ROVIN JOURNEY

2 thoughts on “The Grand Canyon of Texas!!”

DEAR KITTY: The Unique Journal of an Unusual Life from Abuse to Freedom

A woman, her Story, her Semi, her Van, her Man, her Dog, her Camera

Homeless and Loving It!

Life on the Road

“My passion for travel, writing, backpacking, and photography starts here.”

rvsue and her canine crew

Living the life of a Nomad!!

This moment in time...

A journal of our travels and how we arrived at this moment in time!

On the move in a big ol' BEAR!

jammin' on down the road

A Journey of Self-Discovery & Adventure

Oh, the Places They Go!

Two retired educators touring the country in their motorhome

Newhallin - Dragging Our Bed Around

Hector and Brenda on a journey of discovery

We're homeless. Intentionally. What planet was I on when I agreed to this?

The Art and Craft of Blogging

The latest news on WordPress.com and the WordPress community.